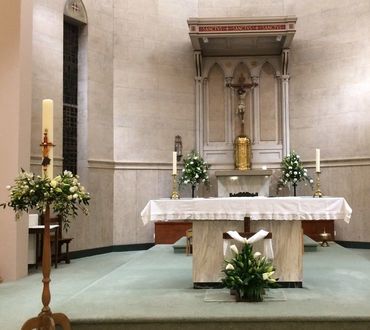 The History of our Parish

The  Parish of St Joseph's was established in 1923 when a modest church was erected in Sunnyside Gardens, Upminster.  Because of a rapidly growing population the present site on the corner of St Mary's Lane and Champion Road was purchased and the original site sold to the Post Office for the construction of a telephone exchange.

The foundation stone for the new Church was laid and blessed by Bishop Doubleday on 25th March 1939.  On 28th October 1939 seven weeks after the beginning of the second world war, the completed Parish Church of Saint Joseph was opened and bless by the Bishop.

The main service that takes place in the Catholic Church is the Celebration of the Eucharist, commonly know as the Mass.  Jesus Christ the founder of the Christian faith took bread and wine and said to his followers "This is my body, take and eat.  This is my blood, take and drink.  Do this in memory of me".  The word Catholic means universal and the Mass is celebrated in the same way in every Catholic Church throughout the world.

Inside the church, on the Sanctuary where the service is conducted is the main altar.  In the central position at the rear is the tabernacle which houses the Blessed Sacrament, the real presence of Jesus in the form of consecrated bread.  A red sanctuary light burns night and day in front of the Blessed Sacrament.  This you will find in every Catholic Church.  An image of the crucified Christ hangs above the altar and the inscription high above it reads "IN CRVCE LATEBAT SOLA DEITAS AT HIC LATET SIMVL ET HVMANITAS" - The Latin is taken from a prayer/hymn ascribed to Thomas Aquinas.Its translation by Gerard Manley Hopkins is ,'On the cross your Godhead made no sign to men ;here your very manhood steals from human ken.' We would nowadays say some thing like,'On the cross you could not see he was God.But here and now you cannot see he is man either.'-because ,of course ,his presence is in the form of bread and wine.Thomas's quote is not about the revelation of God, on the cross or anywhere else,but about our need for faith in recognising what is even less evident now than it was at Calvary:the presence of God. As Thomas put it in the opening words of the hymn,'I adore you God, even though you are Hidden.'  Above that is a symbol of a dove which represents the Holy Spirit of God.

The two side windows on the sanctuary were installed relatively recently in the mid 1980's.  They were made under supervision of the monks at Prinknash Abbey in Gloucester.  Each window has four separate panels.

In the left window is depicted the dawn of creation represented by the dove of the Holy Spirit, the Christian Revelation of God as Father, Son and Holy Spirit, the Bible ad the Greek Letters X and P which are the first two letters of the name Christ.


In the right hand window the four panels all contain Eucharistic motifs, wine jars, gapes and vine leaves reminding us that Jesus said 'I am the true vine'.  The fish was a coded signal of Christ to Christians who could not gather openly without persecution.  There is also a picture of two golden loaves on a platter symbolising the bread of life.

The Paschal Candle represents Jesus Christ as the light of the World.

The Pulpit is where the Word of God (the Bible) is proclaimed and the Minister preaches to the people.

On the left is the chapel dedicated to Mary the mother of Jesus.  The wooden statue of Mary was purchased in the 1980's and came from Italy.  Catholics honour Mary and kneel and pray here at the side altar, asking her to intercede for them.  There is a candle stand where someone saying a prayer will light a candle.

The two stained glass windows were also made the by monks at Prinknash Abbey.  These were installed in 1986.  One is the smiling picture of Mary and the other is St Joseph, the foster father of Jesus.

On the right is the chapel dedicated to St Joseph, who is the patron saint of this church.  St Joseph married Mary who had conceived Jesus by the power of the Holy Spirit.  Joseph was a carpenter by trade and taught the young Jesus how to work with wood.

The Baptismal Font is where babies and sometimes adults are baptised.  The history of it seems to be lost but it is very old - dated 1507.

The Sacristy is a place where the Priest and the altar servers robe and is also a storage place for candles, altar wine communion vessels etc.

The Madonna in Prayer painting was commissioned by the Sisters of the Sacred Heart of Mary Convent and is a copy of the original painting by Sasso Ferrato.

A statue of the Sacred Heart of Jesus is at the rear of the church and again there is a candle stand where people come and pray.  A prayer board has recently been erected where people put in prayer requests.

The Choir Loft has extra seating and used to house a pipe chamber organ.  A more modern organ is now used.

The stained glass window above the loft was installed in 1988 and depicts the road to Heaven.

A holy water font is located at the church exits where Catholics bless themselves with the sign of the cross saying "in the name of the Father and of the Son and of the Holy Spirit, Amen".

The church porch is a place where people are welcomed and notices are displayed. 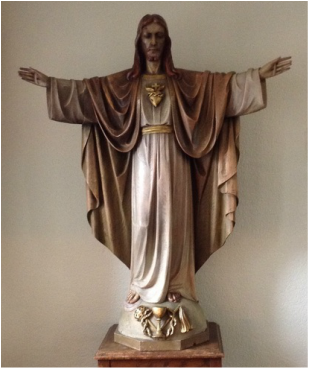 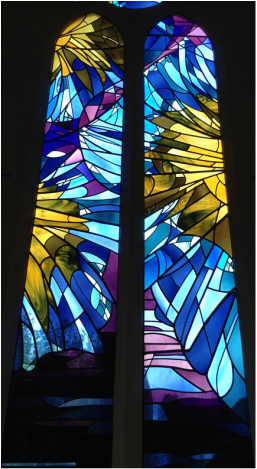