On Monday 10th August the Prime Minister, Boris Johnson, visited St Joseph's School. He was welcomed by Mrs Bernadette Matthews, headteacher. He came to see for himself the measures that have been put in place for the re-opening of the school in September. The Head took him on a tour of the school and he was pleased to see that everything is in place.  He asked many questions and from them it is obvious he is concerned about the children's safety and welfare. He thanked Mrs Matthews for all she and the staff are doing to protect the children and for all the time and dedication that they have shown. The Prime Minister also visited Sacred Heart of Mary Girls' School where Ms Qurrey the Headteacher showed him the Summer Camp that has been running throughout the summer in action. 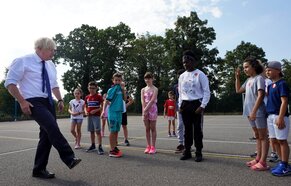 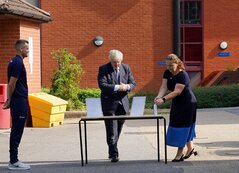