Sunday 22nd November , the Feast of Christ the King, the Church in England and Wales celebrates National Youth Sunday. On this day, we celebrate the young people in our parish and community and all the gifts and talents they share with us. The theme for this year's NYS is 'Together'. Normally on NYS, young people would be involved in the Liturgy. Whilst the Parish Community can't be together physically as we were, we are united together in prayer. This weekend especially, we pray for the young people of our Parish.
Follow @NationalYouthSunday and for more information , please go to www.nationalyouthsunday.com
In these troubled times if you are feeling depressed , stressed or anxious ,please make contact with Havering Talk Therapies (IAPT)
0300 300 1554 (OPTION 2)
9AM to 5PM, Monday to Friday
www.mytalkingtherapies.org.uk
If you need urgent help call the Mental Health Direct helpline
0300 555 1000 , Day or Night
LOCKDOWN STARTING 5TH NOVEMBER 2020

The country will be going into lockdown again  from 5th November until 2nd December inclusive. This mean that we will not be having  any public celebrations of Mass during this time - we will however have the church open on Sunday mornings between 9am and 12 noon for private prayer.


Fr John would like to convey his gratitude to all those volunteers who have given their time so generously in order to keep the church open and COVID-19 secure during this difficult times.

Fr John will continue to celebrate Mass daily and to pray for the parish family.

We look forward to being able to be re-united in prayer as soon as the restrictions are lifted and it is considered safe to do so.

On Monday 10th August the Prime Minister, Boris Johnson, visited St Joseph's School. He was welcomed by Mrs Bernadette Matthews, headteacher. He came to see for himself the measures that have been put in place for the re-opening of the school in September. The Head took him on a tour of the school and he was pleased to see that everything is in place.  He asked many questions and from them it is obvious he is concerned about the children's safety and welfare. He thanked Mrs Matthews for all she and the staff are doing to protect the children and for all the time and dedication that they have shown. The Prime Minister also visited Sacred Heart of Mary Girls' School where Ms Qurrey the Headteacher showed him the Summer Camp that has been running throughout the summer in action.

follow us on facebook below
www.facebook.com/stjosephschurchupminster
We would like to extend a warm welcome to all our parishioners ,especially to new members and to those who would like to join us. If you are new to the parish please fill out one of our welcome cards at the rear of the church and place them through the presbytery door ( the house next door to the church ) so we can add you and your family to our parish database.  We would be very grateful if your joining us ,if you would consider joining our Gift Aid scheme.
There is more info on the Gift Aid page . http://www.stjosephschurchupminster.com/fund-raisinggift-aid.html
Thank you.
Interested In Becoming A Catholic?
Each year the Parish runs a course for adults who have not been baptised and would like to be,as well as for Christians of other denominations who would like to be received into the Catholic Church,and Catholics who have not been Confirmed.The course is known as the RCIA (which stands for the Rite of Christian Initiation of Adults).For more information speak to Fr.John or Veronica Hogan.There are some useful links with more information under the tab RCIA. www.stjosephschurchupminster.com/rcia.html

Steward of the Gospel

www.stjosephschurchupminster.com/steward-of-the-gospel1.html
​​We have received the First Formal Proposal from the Diocese about the Renewal and Reorganisation.
Please take a moment to read this important document regarding the future of the Diocese.

simplyst.joseph@gmail.com.
​www.stjosephschurchupminster.com/live-simply.html​
YOUTH CLUB SUSPENDED DURING COVID
Youth Club is on Wednesdays during term time. It starts at 7.30pm and ends at 9pm. Subs are £1 a week. www.stjosephschurchupminster.com/youth-club2.html
FRIDAY MORNING BIBLE STUDY: Breakfast and Bible Study SUSPENDED DURING COVID
Join a friendly group on Friday mornings around 9am for bible study and prayer in St Joseph's Social Center. All welcome, including children and grandchildren. Contact Stephanie on 07736847187 for more details. 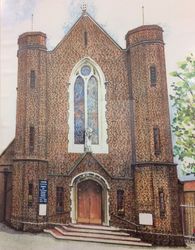